By Roberto Mercati. This article was originally published at MetaPrintArt website

Blister printing for the pharmaceutical industry is undergoing a market transformation, which encourages the largest packaging companies in the sector to consider digital printing. ESMA member Tiger Coatings supported the change.

“The question is”, explains Yiannis Tselikas, Sales Director and Co-owner of  TS Converting, a Greek company specialised in converting printing material for flexible packaging for the pharmaceutical industry, “to be able to reduce print runs while maintaining a high print quality comparable to the one we have today with rotogravure.”

We met Yiannis Tselikas in Telgate (Bergamo) at S2 Converting, when he visited to see the testing of the new Alusilver Phoenix HDF, which was developed with DG Italia. S2 Converting is specialised in the construction of machines for flexo printing on aluminum film. It has been working for some time with DG Italia, which has developed a new system for digital printing, including variable data, on flexible metal supports. We spoke about this collaboration recently in another technical article. 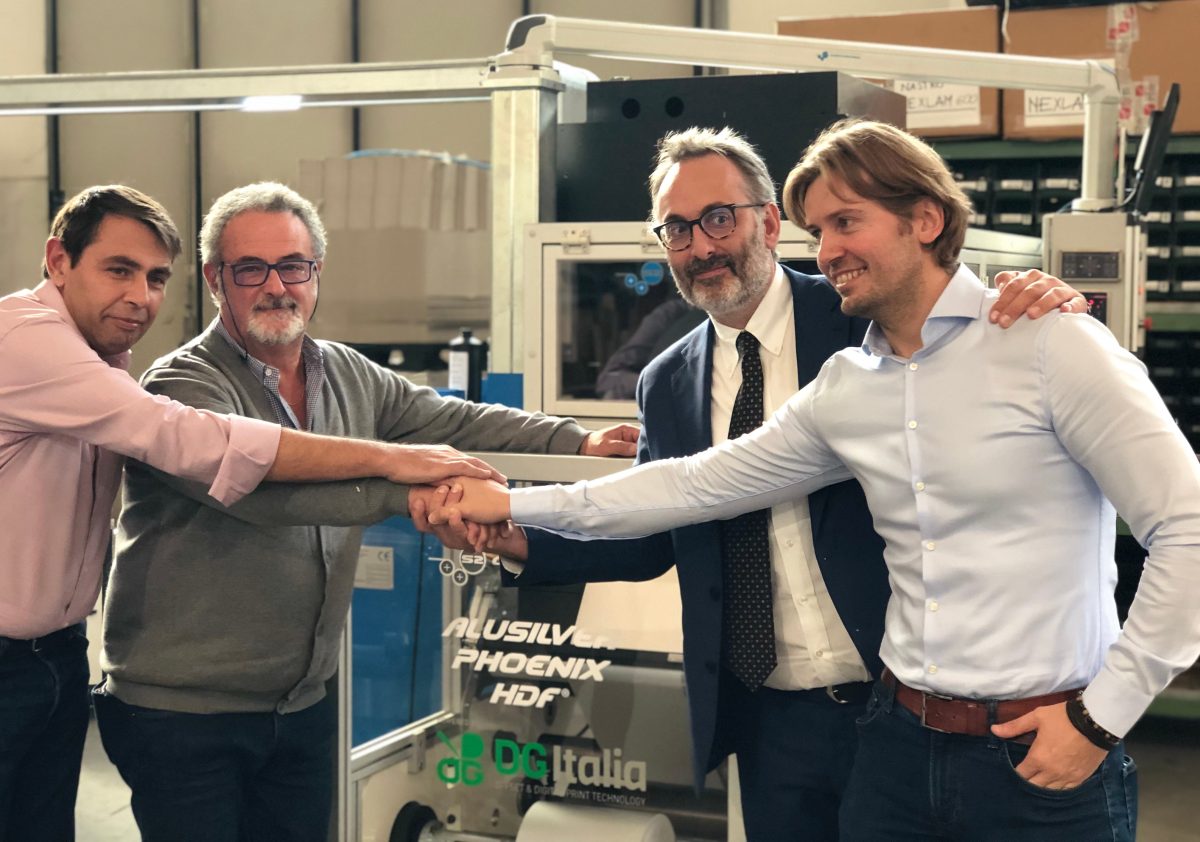 From left Yiannis Tselikas TS Converting Franco Nicastro S2 Converting Cosma Roberto Vercelloni DG Italia and Gregor Gajda of Tiger CoatingsIn this partnership, created to successfully implement such an ambitious project aimed at the pharmaceutical market, which has always been very attentive to innovation, for the team of DG Italia and S2 Converting it was necessary to involve a specialised partner for the realisation of the right ink: TIGITAL® by  TIGER Coatings based in Austria. For this particular application, TIGER’s Inkjet R&D team has created a series of TIGITAL® branded inks. In addition to the fundamental characteristics of high-quality inkjet ink, this special series brings innovation and a unique feature in the industry: compliance with Swiss Ordinance for printing inks applied on the non-food contact surface of food contact materials (and therefore, also applicable to the pharmaceutical world). These inks were developed within the Beyond Europe project ROBASTICS funded by the Austrian FFG.

In summary, the legislation says that the principle cannot in any way exclude contact by migration or contamination of the inks used for packaging. It is necessary to follow the list of components (and the relative quantities) listed in the list. So it is a completion and going beyond the concept of “low migration” that both printers and end customers are passionate about. In addition to being compatible with a low migration process (which involves the entire production process), TIGITAL® SWISS ORDINANCE UV INK brings further benefit for the end customer. Gregor Gajda, Project Sales Manager TIGITAL® was also present to seal the three-way partnership during the testing.

First on the market

Although the basic concept of this technology is already widely tested with 11 machines that S2 Converting has on the market, the Alusilver Phoenix HDF is the first machine of its kind, which was designed based on customer requests.

We asked Yiannis Tselikas how he had met DG ITALIA and S2 Converting: “When we decided that we would print part of our production in digital, we did a careful research, but it was not possible to find a machine on the market that would answer all our requests with precision. We then started to select the best partner to entrust with the study of the digital solution and this select we found, after a series of technical evaluations and press tests, in DG ITALIA that proposed for the construction of the coil / reel line, their partners in this area, S2 Converting, which we already knew for its flexo applications, for example for the printing of yogurt lids. We also knew of their ability to build custom-made machines and therefore the possibility of having these two companies realize this project seemed the best solution.”

The complexity of the simple 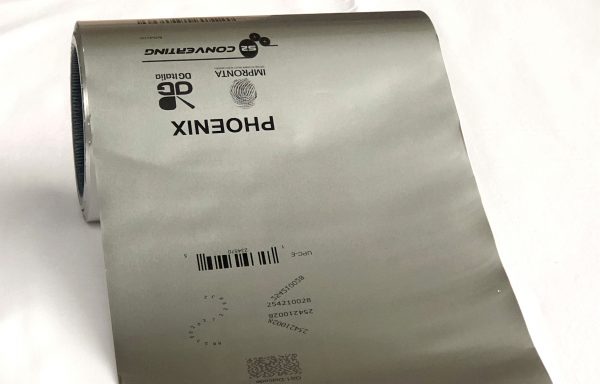 The print quality allows to reproduce texts even in small characterFrom that moment the technical staff of DG ITALIA and S2 Converting set to work following the specifications provided by TS Converting. Thus, was born the Alusilver Phoenix HDF project based on many years of previous experience of both companies in the field of converting and digital printing.

The line resembles a print system that looks simple: a hardware part for transporting the reel from the unwinder to the rewinder, and a central part, with relative management software, for printing.

However, Cosma Roberto Vercelloni explains and demonstrates us the various techniques that make this machine a simple system, but at the same time sophisticated and with some patents, which constitute its strengths. For example, put very simply, there is an ink gelifier system downstream of the inkjet bar or bars, to block the expansion of the ink which will then be polymerized at the output. This takes full advantage of the quality offered by the technology chosen for this application, especially in the printing of very small characters. UV inks, therefore, which can be dried with LEDs or traditional lamps. In this specific case, the customer chose mercury lamps to ensure 100% polymerization even for the fastest speeds.

The HDF works at 70 meters / minute on a band up to 450 mm and has, at the moment, an inkjet bar that can print in monochrome (black), but already prepared for a second print bar for spot colours. Thus, printing in four-color at 600×600 dpi is also possible. Similarly, the machine in this version made for TS Converting only prints digitally but is prepared for the addition of up to two flexo units, should the customer decide this implementation.

At the end of the test, the result was positive for TS Converting. During the dinner organised by the two Italian companies in the beautiful setting of the Carimate Golf Club, Yiannis Tselikas explained the reasons for this basic shift from rotogravure to digital printing, even if at the moment it is a period of supervised training.

“We have always printed blisters and pharmaceutical packaging with rotogravure machines. But lately the market is also asking for medium and short runs that we wanted to achieve by facing a reasonable investment while maintaining the high-quality of the rotogravure.”

This is how the search for the ideal solution began, with TS Converting finding it in the partnership between the two Italian manufacturers.

“With HDF we are certain”, continues Yiannis, “of having made the best investment to be more competitive on the market. Now we can also provide our customers with blister packs in short runs at competitive but high-quality prices. And being the first to take this step benefits us on the market.”