Networking, presentations, catching up with old friends and meeting with new partners, some of them members-to-be. This is how ESMA’s daily routine looked during FESPA, the global exhibition for wide format digital, screen and textile print, held in Cologne between 18th and 22nd May 2015. 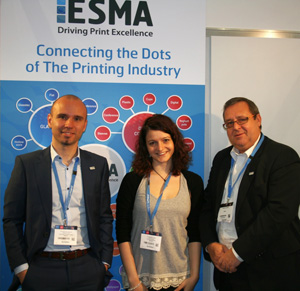 ESMA team: Maciej Bochajczuk, Bori Csala, Peter ButtiensCologne proved to be a perfect location and Kölnmesse – a very efficient exhibition centre for a fair of FESPA-format whose intention is to stage all major printing technologies. Strolling through different halls we could witness the increasing relevance of digital print, the steady growth of textile and garment which stimulate pushing of the boundaries of print quality. Last but not least, the screen printing sector was represented by all key players and maintained its prominence.

For the first time ESMA’s representation consisted of an entire team: Peter Buttiens, the CEO, Bori Csala, the Personal Assistant and Maciej Bochajczuk, the newly appointed MarCom Coordinator. They welcomed visitors at the stand shared with our media partners from “Specialist Printing Worldwide” and Rudi Röller (KIWO GmbH), one of the most meritorious ESMA members who presented the recent developments of his Screen Print Initiative – the web platform www.screenprinting-technology.org.

Day 1 of the show featured a presentation by Peter Buttiens in FESPA Education Hub. During a “Lunch & Learn” session ESMA’s CEO explained the contemporary trends in industrial printing and their market applications and admitted afterwards: “The focus of the session was laid on the ‘learn’ aspect and still we attracted a good number of delegates. In the matter of fact, the current capacities of screen printing and their industrial applications examples are extremely spectacular, also to occasional users of that technology.” 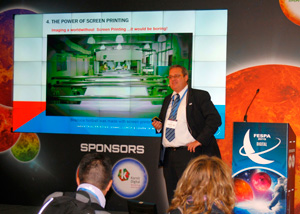 Peter Buttiens explaining the power of screen printInterested visitors could investigate further on that subject in the specially arranged Industrial Print Showcase. The concept debuted this year with a strong support of demonstrators and application examples delivered by ESMA members. Industrial Print Showcase can definitely become an integral part of FESPA but not without further development of its formula.

The second presentation of Peter Buttiens took place during the Printeriors Conference which was held alongside FESPA and showcased how print can be employed in the realms of interior decoration. In his speech, Peter Buttiens emphasised the value of cooperation between designers, printers and other players involved in the creation-production process.

Printeriors delivered an opportunity to introduce Printed Interior Decoration, a conference organised by ESMA and scheduled for 2016/2017 period (www.printedinteriordecoration.org). However, throughout the entire FESPA show, even more interest was raised by the upcoming ESMA events, in particular the Masterclass of the POLEOT project (www.poleot.esma.com) and The Inkjet Conference (www.theijc.com).

FESPA 2015 was filled with special moments, including the exclusive FESPA Awards Gala Dinner and the anniversary celebration of the nearby RK Siebdrucktechnik GmbH, connected with the company visit. For the whole ESMA team it was a busy time, spent on inspirational meetings and talks that will profit the organisation during our upcoming activities.